Introduction
The interesting cover of this game really caught my attention when I first saw it at my local game retail store. You see a safe dial on the cover with the words "Safecracker" right above it.

Closer scrutiny reveals that it's another one of those adventure games from The Adventure Company. With so many games released by them so far, I almost would have walked away from it. However, the title piqued my interest; I have always been one who is drawn to a niche subject. Moreover, I have had the chance to open safes of this nature in my past career and always wondered how they could be opened if the code was ever forgotten by careless users.

Well, I did a bit of research and found that professional lock and safe-crackers have to rely on the use of torsion wrenches, picks, autodialers, drills, x-ray devices, torches, plasma cutters, explosives, or in the case of bank vaults - excavation!

Safecracker is a fun and interesting adventure puzzle game from Kheops Studio that spares you the agony of hoisting around a ton of TNT to blow up the safes you find within. This game is reliant on logic and your powers of observation more than anything else. Take a look inside, you may be surprised by what you find.

Background
You get to play the role of an expert safecracker who has been employed by the family of billionaire Duncan W. Adams who passed away recently. Hidden somewhere in his beautiful mansion is Duncan's last will and testament.

If only things were that simple. Why are rich men always so eccentric?

It seems that Duncan likes collecting all sorts of safes and locking mechanisms. You have been told by a relative that somewhere among the 35 safes scattered inside the mansion is what you seek. Can you accomplish the nigh on impossible and find the missing papers for the recently bereaved family?

Game Play
As is typical of adventure games, this is a single only player game. The game provides you 5 keys to select from when you start the game. This means up to 5 different players in your family could attempt this adventure by using their own key (save) slot. You can save as many times as you wish in the game while using your own key.

The game starts off with a movie explaining the story's background. It tells of poor Duncan's untimely demise and of his missing will and testament. You also get a letter asking for your help in retrieving the documents.

Moving around the mansion is straightforward. There is a cursor in front of you that you can move around on the screen. The cursor looks like an arrow with a hexagonal bolt below it. If you are allowed to move to a location ahead of you, you will notice the cursor start to animate and the bolt start to spin. Click and your character moves forward.

In case you didn't catch that - Safecracker, like most other adventure games, does not allow you to roam freely in a 3D environment - like in a first person shooter kind of game. There are prescribed points in a room that you can travel to, and your views of the world are limited to these static points. Not that it's a bad idea, in my opinion. It's just the way it is for adventure games ever since the original game of Myst was released.

If you can view an object close up - like to read a letter, or to examine a safe; the cursor will feature an animating lens that covers the hexagon. Click and you will likely hear your character speak up and comment something that may help you in the game.

When it comes to solving puzzles inside the mansion, the cursor will turn into one that feature two gears within the hexagon. This is the action cursor and it denotes you must interact with an object, such as a safe or keypad lock. Unlocking safes most often require you solve a logic puzzle that ranges from those that are dead easy to those that are fiendishly difficult conundrums. Keypad locks are usually solved with a code that you find somewhere, although the game does make it interesting as you progress by requiring you to think laterally or to use your powers of deduction.

You will have to be sharp when trying to solve the puzzles. There may be a clue somewhere in the game that helps you with a safe puzzle, but you will usually need to put on your thinking cap and exercise your grey matter. A little experimentation with a puzzle also helps. Don't worry, you won't spoil anything. These are sturdy safes after all.

Unlocked safes usually contain further clues or useful items, while keypad locks (found next to doors) will unlock more rooms for you to explore in the mansion.

Items that you find inside safes or lying around in the mansion are placed into your inventory. You can easily call up the inventory to look at the items you have found so far. You can also access the in-game map from the inventory if you find yourself getting lost. This is highly unlikely though, as Duncan's mansion is really quite compact and easy to navigate.

Graphics
Duncan's mansion is lavishingly designed and rendered. It's a treat just opening up new avenues of access and getting to explore another wing of the mansion. There is a lovely garden that comes equipped with a fountain (which is part of a puzzle in itself), a kitchen, a large dining room, several lovely bedrooms, a dark cellar, a beautiful game room and more.

The safe puzzles are brilliantly drawn and animated - after all they are the stars of the game. I marvel at the variety seen here, and I am very happy to say that you won't get any casual style puzzles at all - like say a match 3 puzzle, or a hidden object screen teaser to tickle your brain.

You don't get to meet anybody in the game; so it's you, the mansion, the lovely decor and props littering the rooms, the cold iron safes, and the intricate puzzles to test your solving skills. 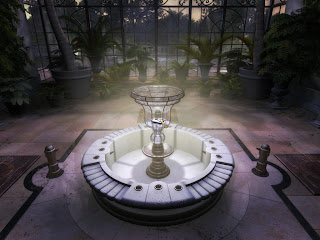 Audio
You hear your character talking to himself as he finds objects and clues within the house. There are some simple sounds you will hear as you press buttons or turn dials, but otherwise that's about it. You will hear music in the game, but it mostly stays in the background, unless you ramp up the volume for it. Nothing that great to mention about the music however.

Pros:
Cons:
Conclusion
It's safe to say (pun intended) that Safecracker will test your powers of deduction and logic as you wander all alone in this beautiful mansion. After gawking at all the extravagances decorating his home, I think the best prize you could possibly deserve for finding the will is boasting that you completed the game without any help whatsoever.

This is the ultimate food for the puzzle brainiac-starved!